The Nottinghamshire & Derbyshire Tramways Company was formed in 1903 by Act of Parliament. It was not until 1913 that the tramway from Ripley to Nottingham, via Langley Mill, Eastwood and Kimberley, was finally opened, the capital being funded by Balfour, Beatty & Co., of Ilkeston.

The laying of the tramlines was a major project - many of the bridges which can been seen along the route date from this time (for example, the bridge over the canal at Langley Mill, which had previously been a wooden construction), and many old buildings were demolished for road-widening (e.g. the Crown and White Hart pubs at Heanor). Initially, the trams only ran as far as Cinderhill / Basford, where people had to switch to trams of the Nottingham Corporation, but later the city allowed Notts & Derby trams to pass over its rails. The long route from Ripley was a single track, with 316 passing places along the route to allow trams to pass in the opposite direction.

A fleet of 24 new cars, half open top, half closed top, was used but during the life of this route, no others were added. As other forms of transport developed, this limitation to the trams caused their demise and by the end of 1932, with only maintenance vehicles in evidence, the system had all but been abandoned and the trolleybuses took over. The final tram ran on a very limited route between Heanor and Cinderhill, Nottingham on the 4th October 1933.
In 1916, the company also took over Ilkeston Corporation Tramways, which had a total fleet of 13 cars at that time, but only 8 were retained. Notts & Derby and Ilkeston Corporation shared a livery of light green & cream with a gold lining but the routes of the two companies never joined.

By the start of 1931, the Ilkeston tramway had ceased operation. 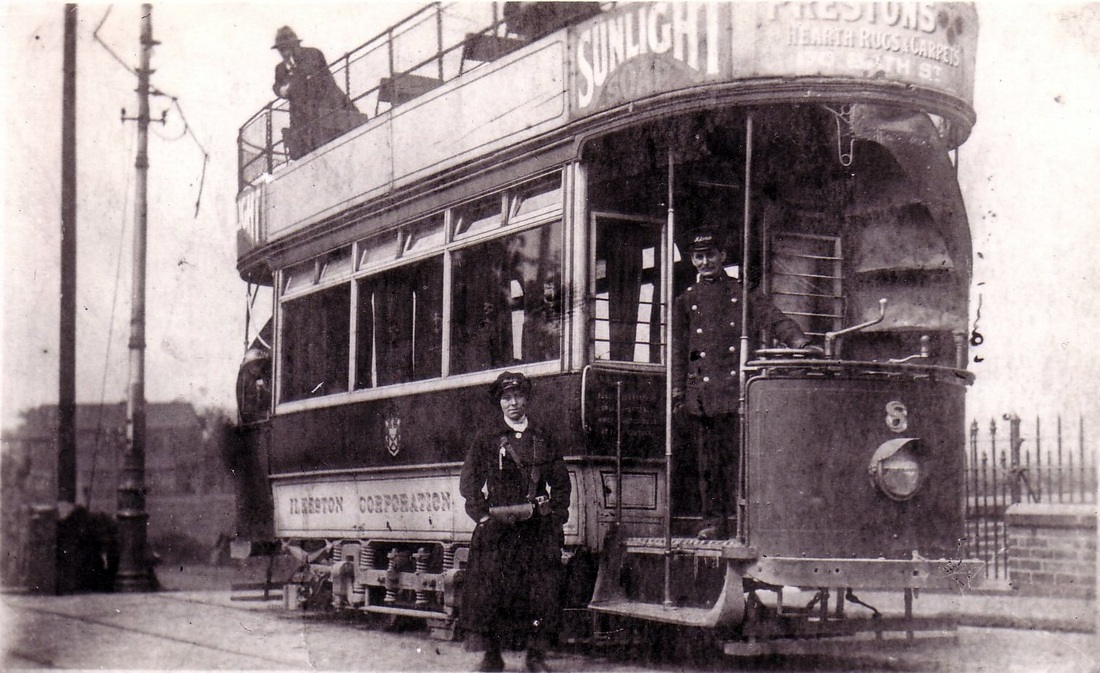 Ilkeston Corporation Tramways tramcar No. 8 at the Cotmanhay Terminus
The oldest operator within the group was the Mansfield and District Traction Company. Formed in 1901, and opened in 1905, it ran a fleet of 12 cars, gradually increasing to 31 cars. In October 1932, these were discontinued and replaced by 34 AEC Regent buses.

Mansfield & District Light Railways top-covered Car No. 13 pictured in 1907 at the Mansfield Woodhouse Terminus
During the 1920's, the improved performance of motor transport gave significant competition to the trams from the many early omnibus companies. Not to be left out, in 1920 Balfour Beatty established the Midland General Omnibus Company. Although incorporated in 1920, the Midland General Omnibus Company's operations started two years later, after acquiring two 17 seat Vulcans, and within 7 years became the largest operator within the group (it was initially called the General, but changed its name after buying the Midland Bus Company from Kimberley). The MGOC shared the Notts & Derbys base at Langley Mill, still used today as a bus depot by the inheritor of the group, Trent Motor Traction. 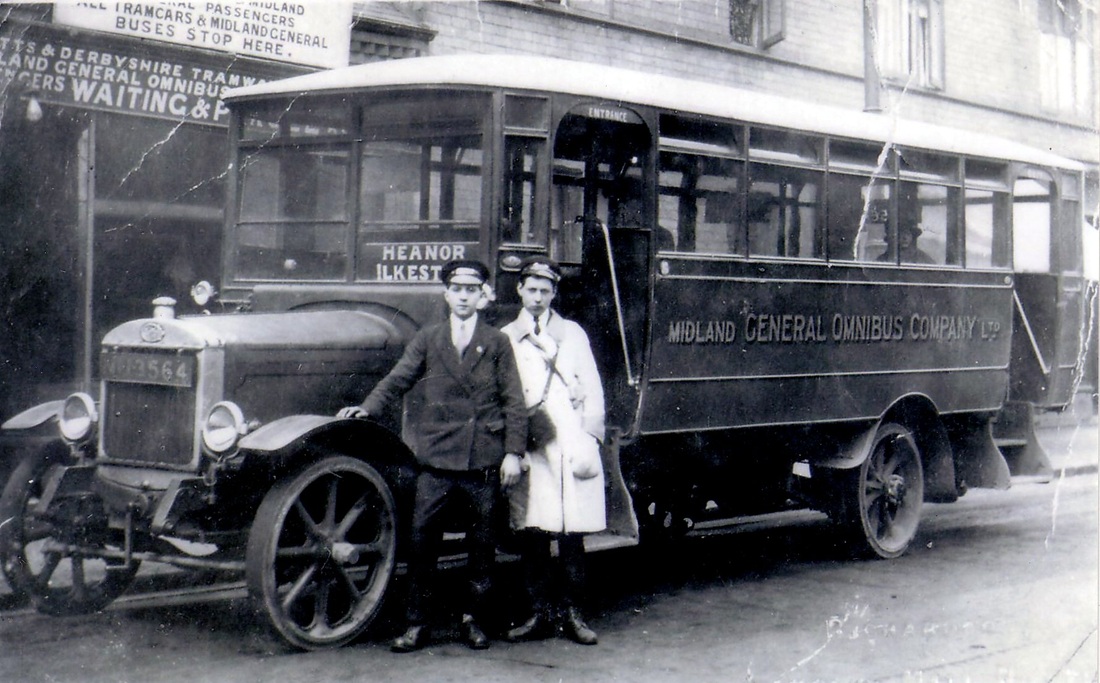 The acquisition of the family firm of Williamson & Son Garage Ltd. of Heanor was significant for the company, one of the family Directors becoming General Manager, first of Midland General & Notts & Derby, and then by 1963, just before his retirement, Mansfield and District as well. 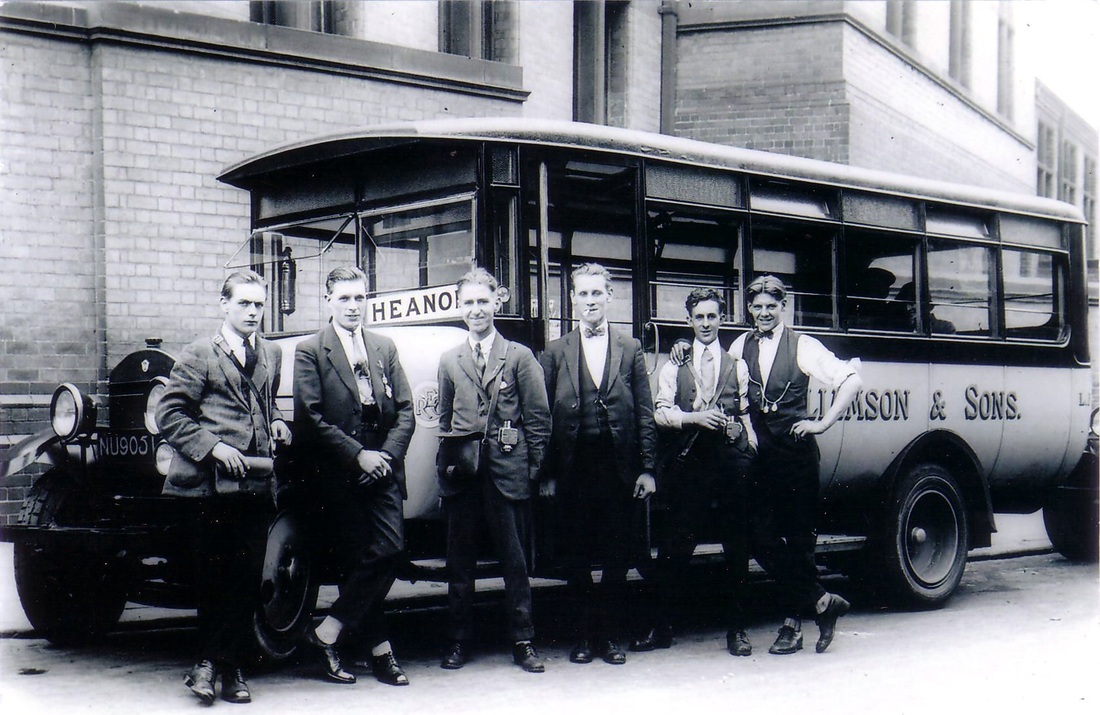 By 1928, Notts & Derbys was given power to operate a trolleybus system in the area. The first part of the system opened between Bridge Street, Cotmanhay and Hallam Fields, Ilkeston on 7 January 1932. On 5 October 1933 the last tram ran on the Nottingham to Ripley route. The trolleybus system was very efficient and reliable, the journey from Ripley to Nottingham taking 90 minutes, with some 230 stops along the way.

When the electricity industry was mostly nationalised in 1948, Balfour Beatty sold the Midland General Group to the British Transport Commission.

Trolleybuses continued until 25 April 1953, when they too gave way to the increased versatility of the bus. The fleet of trolleybuses was sold to Bradford Corporation. 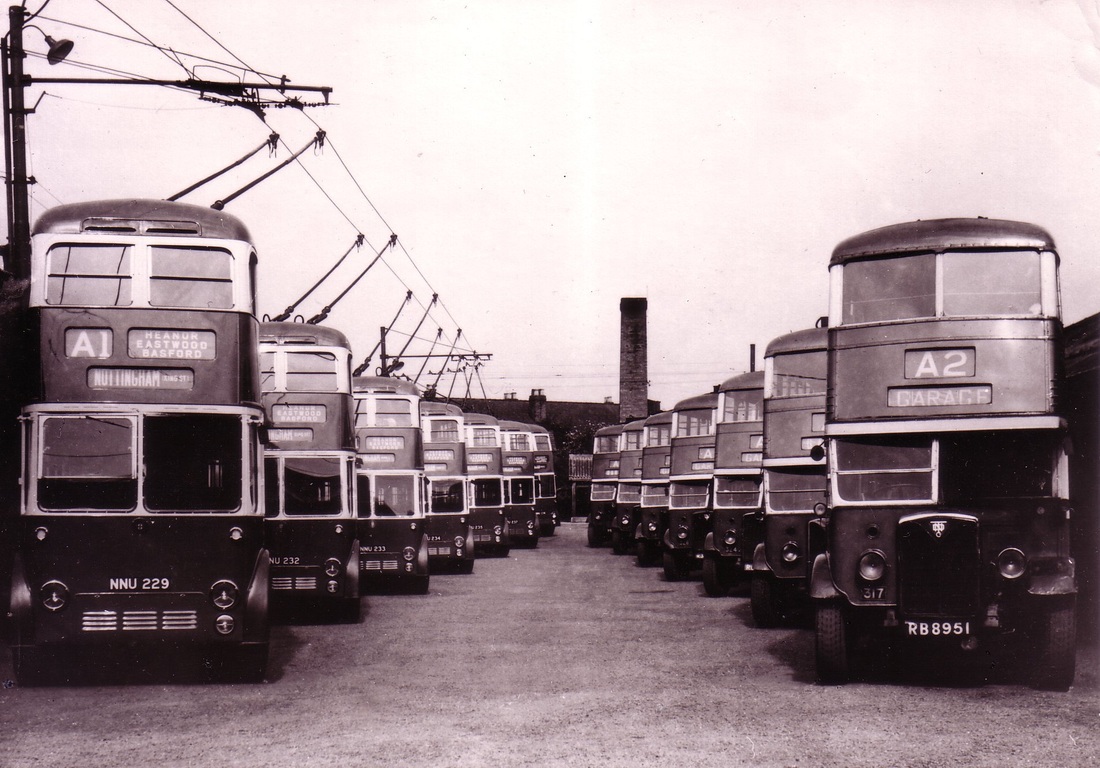 The Midland General Omnibus Company Limited had a very varied fleet in the period from the end of the second world war to the 1960s.

Among their double deckers they had a mixture of Guy, Leyland, Bristol and AEC products. The oldest machines still around in the early 1960s were some
utility-bodied Guy Arabs dating back to 1943/44, which were being progressively withdrawn at the time. Once again the variety of the fleet was apparent, as the bodies were built variously by Northern Counties, Brush and Weymann. Among the Weymann-bodied examples were two lowbridge buses of which one, No. 415 (GRR 62) had been acquired from their associate concern, Mansfield District - also part of the old Balfour Beatty group of companies. This was not the only ex Mansfield vehicle in the fleet.

A selection of AEC Regents, all with Weymann bodies, a large batch of 1950s Bristol Lodekkas and even a lone 1947 Leyland Titan PD1 completed the double deck fleet. 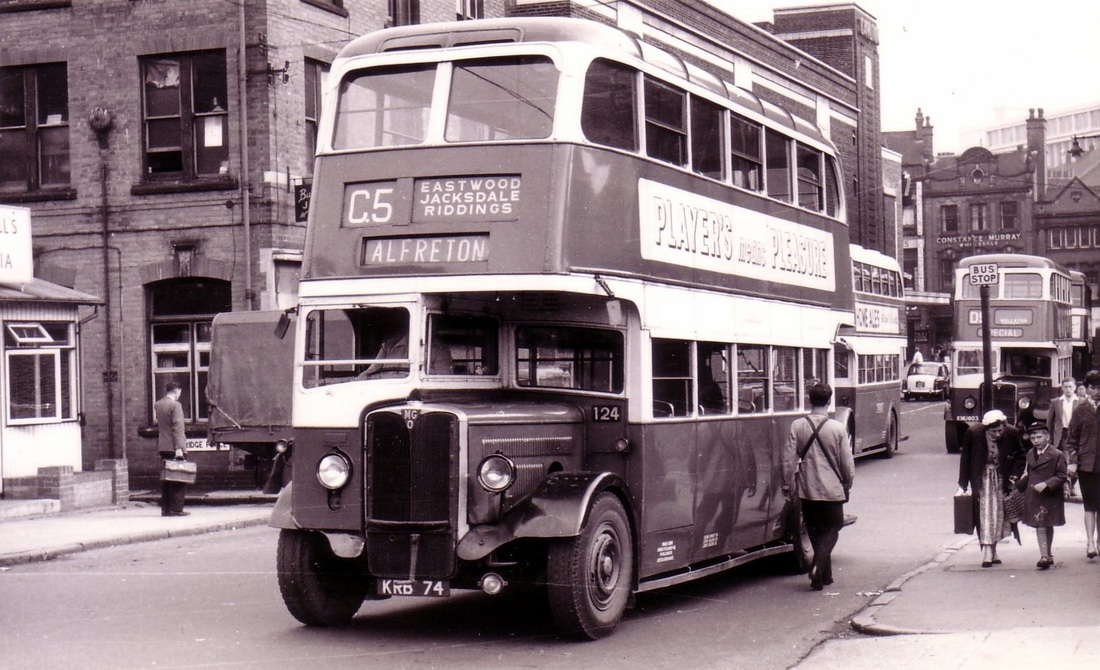 Among the single decker fleet still in operation in 1960 were two AEC Regals which were bought newly built as far back as May/June 1936. In all 41 AEC Regals had served in the fleet, the last 12 being acquired from Mansfield District in 1960; the final two being withdrawn in 1967.

As well as the AEC Regals Midland General operated a pair of pre-war Leyland TS8 Tigers with Weymann bus bodies and a fleet of 25 Leyland PS1 Tigers built in 1948.  The latter had Saunders front-entrance bus bodies seating 35 (or in some cases 32) and were numbered 200 to 224 (KRB 86 to KRB 110). 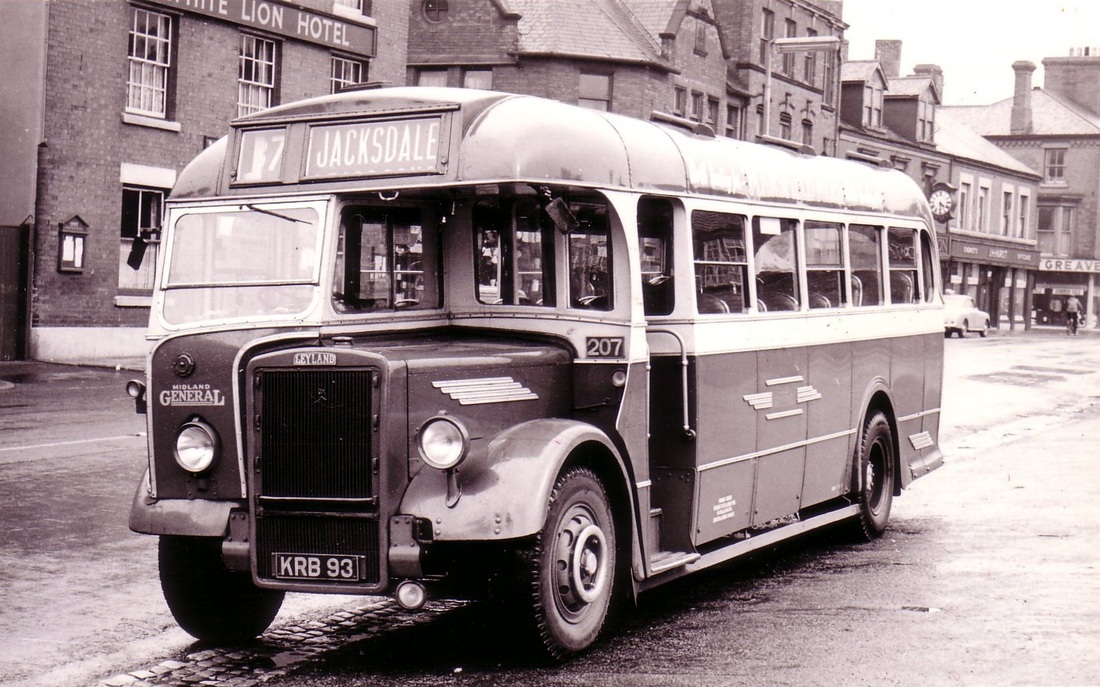 Finally, as would be expected of a Tilling / B.T.C. operator, there were about 50 single-deck ECW-bodied Bristol LS6Gs and MW6Gs built in the mid to late 1950s.
In 1962 the Transport Holding Company took over. 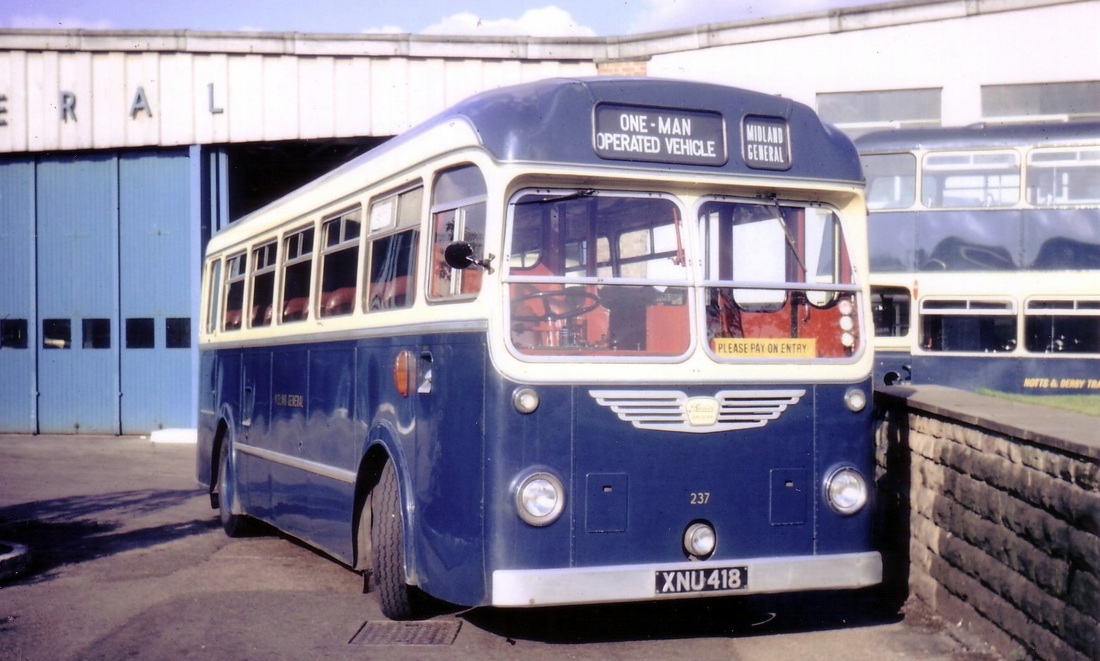 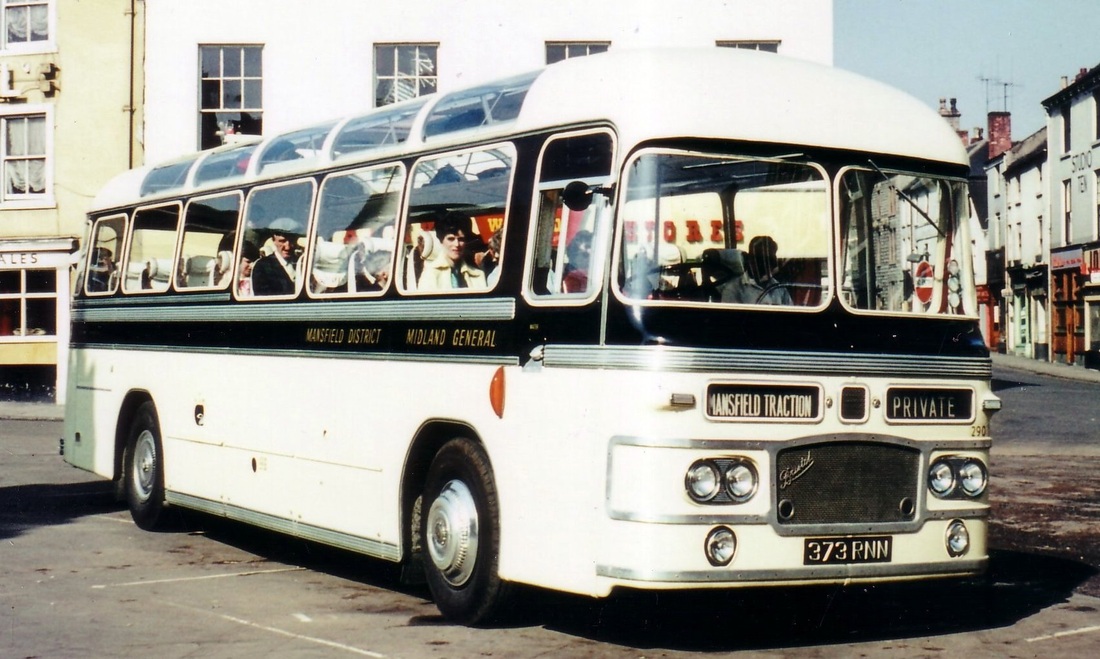 On 1 January 1969, the Midland General became part of the National Bus Company. The other large local bus company, Trent, also became part of the National Bus Company, and the decision was made to combine the two companies, using the Trent colours. The companies merged in 1972 and Midland General ceased to be; all stock, buildings and staff transferring to the Trent Motor Traction Company. By 1978 the last MGO blue bus had been repainted.

The combined Midland General Omnibus Company and Notts and Derbys Traction, ran a large number of routes through both counties. Many of the routes remained unchanged throughout the existence of the companies (and are still being used today). 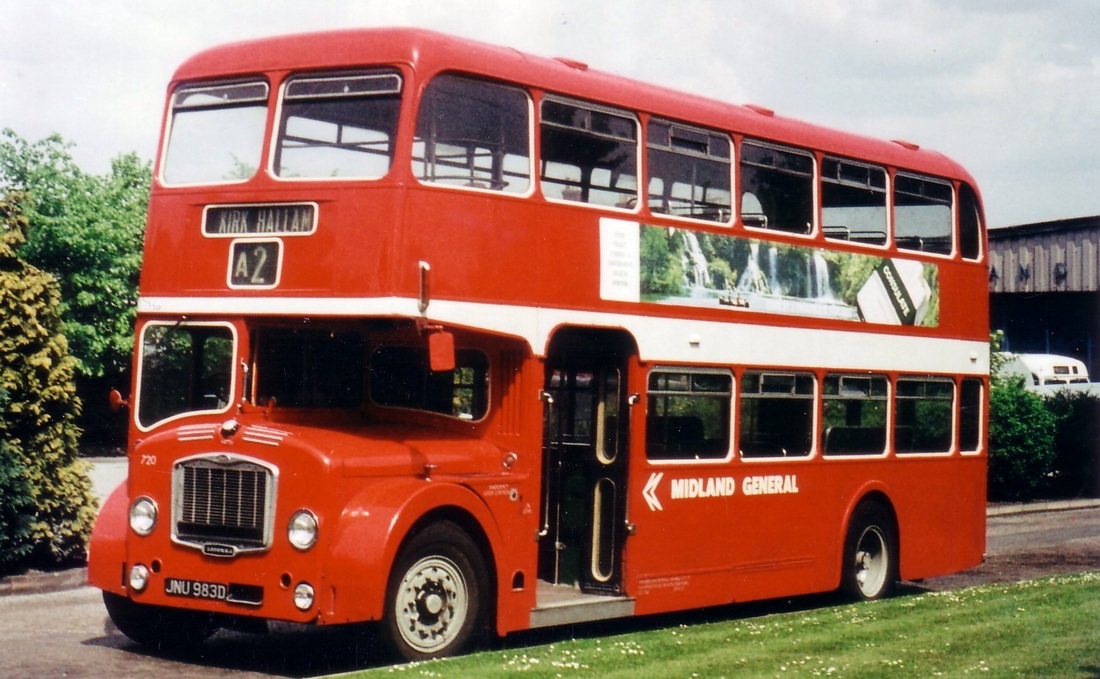