During the 1920's, the improved performance of motor transport gave significant competition to the trams from the many early omnibus companies. Not to be left out, in 1920 Balfour Beatty established the Midland General Omnibus Company Limited to carry on the business of owning, running, hiring, letting on hire, manufacturing, buying, selling or otherwise disposing of omnibuses, cars, cabs, carriages, lorries, wagons, tractors, etc., and other vehicles of any description for transport of passengers, mails and goods etc., common carriers etc.

Although incorporated on the 19th June, 1920, the Midland General Omnibus Company's operations started two years later, after acquiring two 17 seat Vulcans, and within 7 years became the largest operator within the group (it was initially called the General, but changed its name after buying the Midland Bus Company from Kimberley).

The MGOC shared the Notts & Derby base at Langley Mill, still used today as a bus depot by the inheritor of the group, Trent Motor Traction. 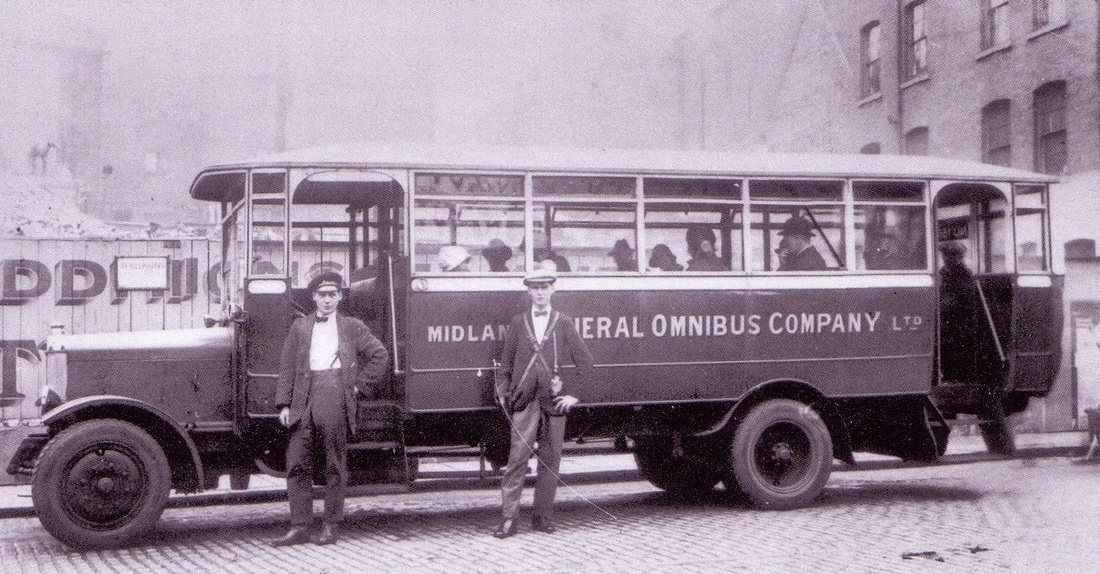 Midland General NU 3564 - 3565, fleet number 5 - 6, Guy BB / Strachan & Brown B32D (with later pneumatic tyres) pictured on Parliament Street, Nottingham in 1929 (just before withdrawal in May of that year).
The Midland General Omnibus Company Limited had a very varied fleet in the period from the end of the second world war to the 1960s.

Among the single decker fleet still in operation in 1960 were two AEC Regals which were bought newly built as far back as May/June 1936. In all 41 AEC Regals had served in the fleet, the last 12 being acquired from Mansfield District in 1960; the final two being withdrawn in 1967.

As well as the AEC Regals Midland General operated a pair of pre-war Leyland TS8 Tigers with Weymann bus bodies and a fleet of 25 Leyland PS1 Tigers built in 1948.  The latter had Saunders front-entrance bus bodies seating 35 (or in some cases 32) and were numbered 200 to 224 (KRB 86 to KRB 110). 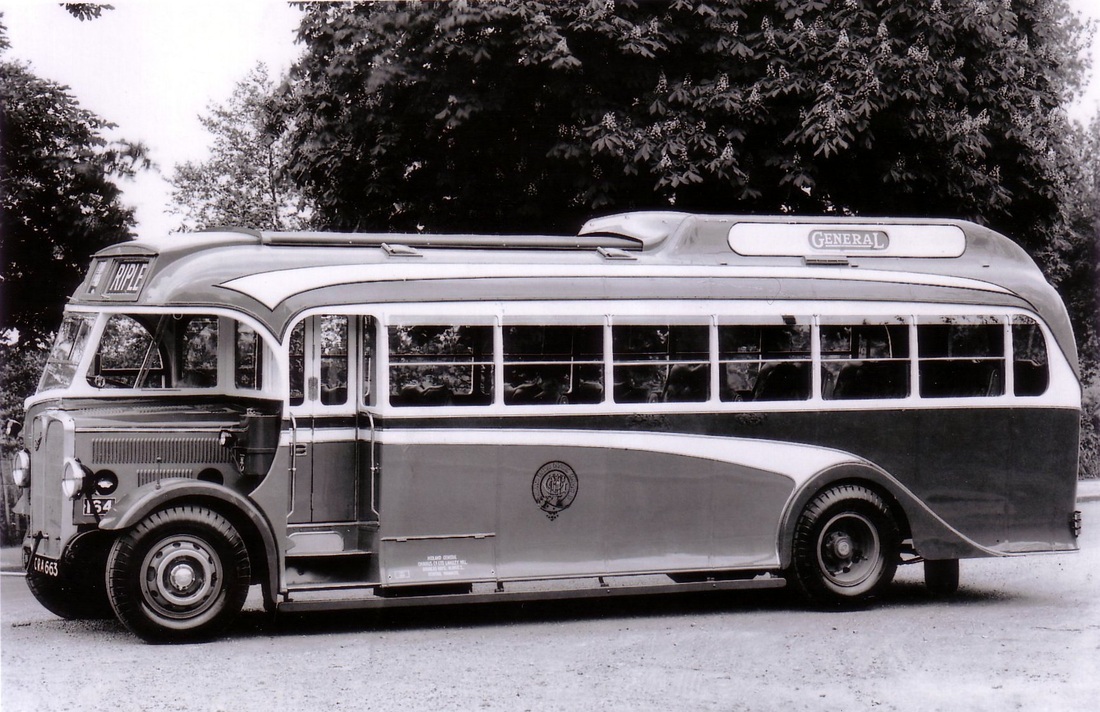 Official photogaph of Midland General CRA 663, fleet number 164, AEC Regal / Weymann C32F pictured when new in 1936. Destination reads: Ripley.
Among their double deckers there were a mixture of Guy, Leyland, Bristol and AEC products. The oldest machines still around in the early 1960s were some utility-bodied Guy Arabs dating back to 1943/44, which were being progressively withdrawn at the time. Once again the variety of the fleet was apparent, as the bodies were built variously by Northern Counties, Brush and Weymann. Among the Weymann-bodied examples were two lowbridge buses of which one, No. 415 (GRR 62), had been acquired from their associate concern, Mansfield District - also part of the old Balfour Beatty group of companies. This was not the only ex-Mansfield vehicle in the fleet. 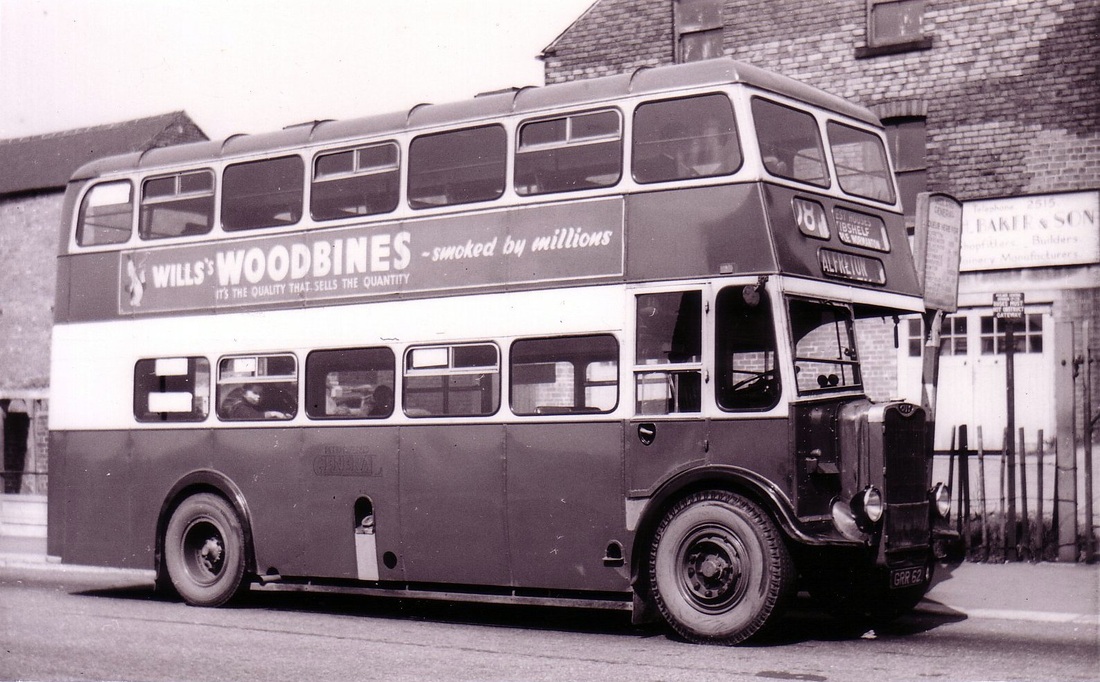 Midland General (former Mansfield District) GRR 62, fleet number 415, Guy Arab II 5LW / rebuilt by Bond (in 1953) L27/28R pictured at Markham Road terminus, Chesterfield in the 1950s, on the Chesterfield to Alfreton route. Destination displayed is: D8 Alfreton via West Houses, Tibshelf and Temple Normanton.
A selection of AEC Regents - all with Weymann bodies - a large batch of 1950s Bristol Lodekkas, and even a lone 1947 Leyland Titan PD1 completed the double deck fleet. Finally, as would be expected of a Tilling / B.T.C. operator, there were about 50 single deck ECW-bodied Bristol LS6Gs and MW6Gs built in the mid to late 1950s. 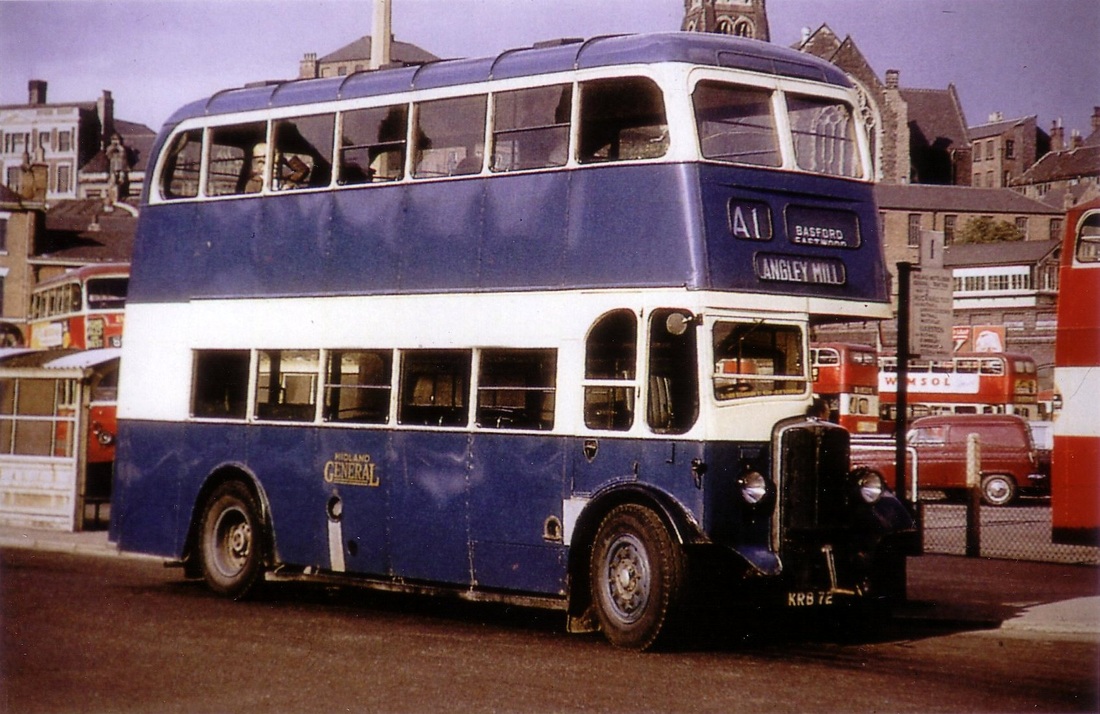 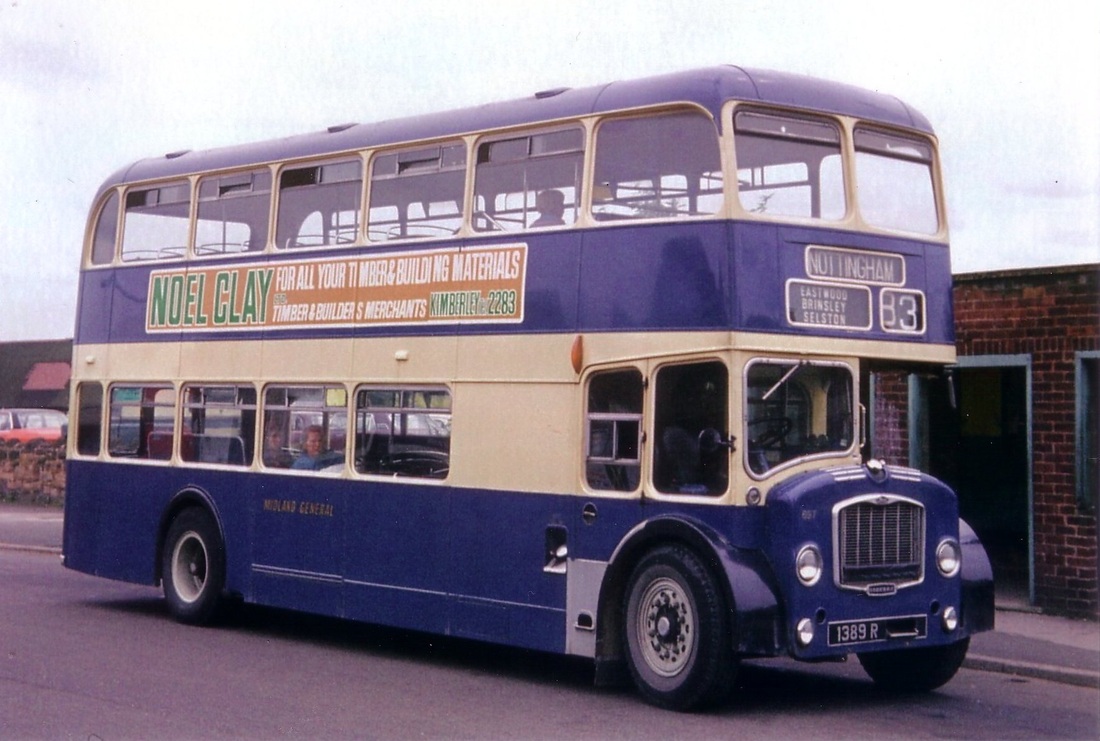