By 1928, Notts & Derby was given power to operate a trolleybus system in the area. The first part of the system opened between Bridge Street, Cotmanhay and Hallam Fields, Ilkeston on 7 January 1932. On 5 October 1933 the last tram ran on the Nottingham to Ripley route.

The trolleybus system was very efficient and reliable, the journey from Ripley to Nottingham taking 90 minutes, with some 230 stops along the way. When the electricity industry was mostly nationalised in 1948, Balfour Beatty sold the Midland General Group to the British Transport Commission.

Trolleybuses continued until 25 April 1953, when they too gave way to the increased versatility of the bus. The fleet of trolleybuses was sold to Bradford Corporation. 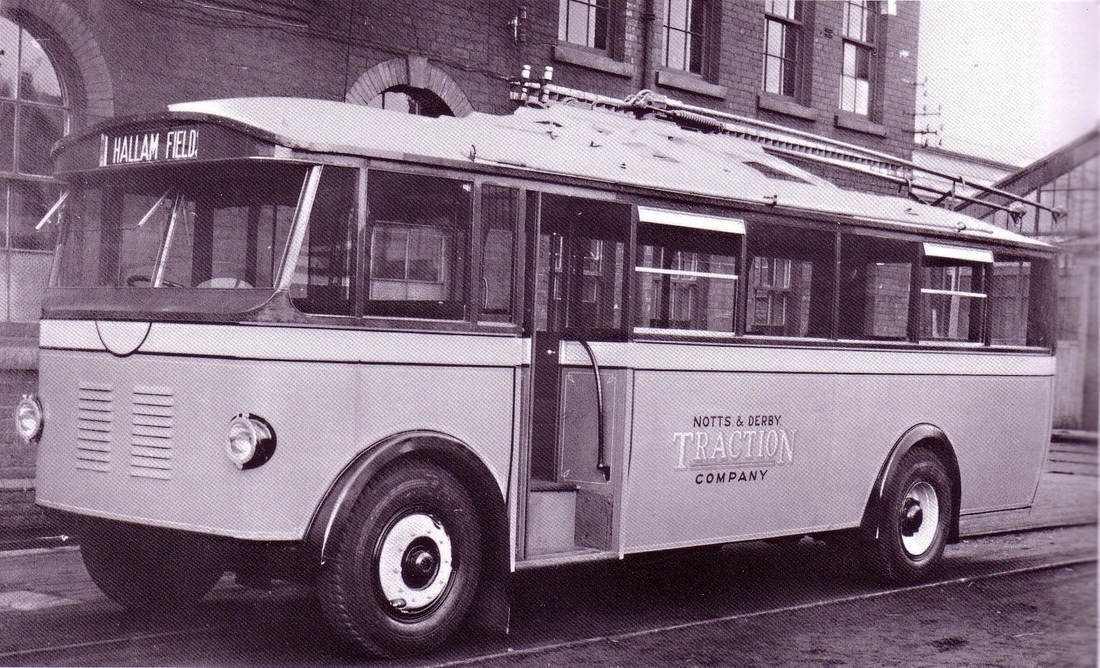 The first Notts & Derby trolleybuses were a batch of six smart and streamlined English Electric single-deckers with forward-entrance bodywork seating 32 passengers.
Numbers 300 - 305 (RB 5568 - RB 5573) entered service in 1932, operating in the Ilkeston area.
This vehicle was photographed at the English Electric works before receiving its registration plate and fleet number.
The 'Notts & Derby Traction Company' logo was very short-lived and was soon replaced by the more familiar 'NDT' letters enclosed in a circular belt. 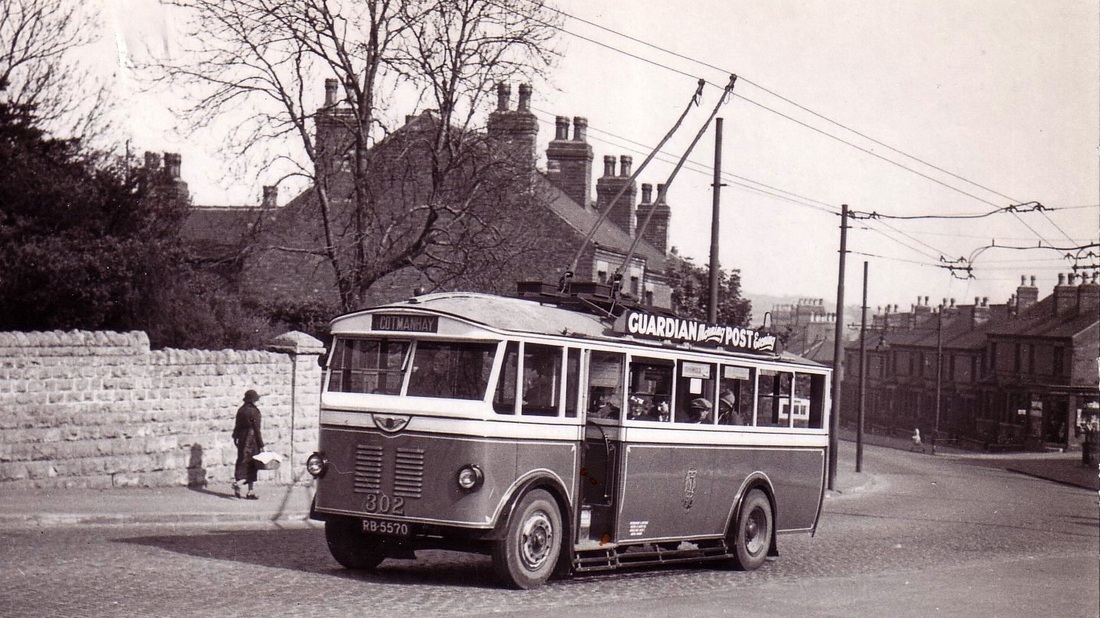 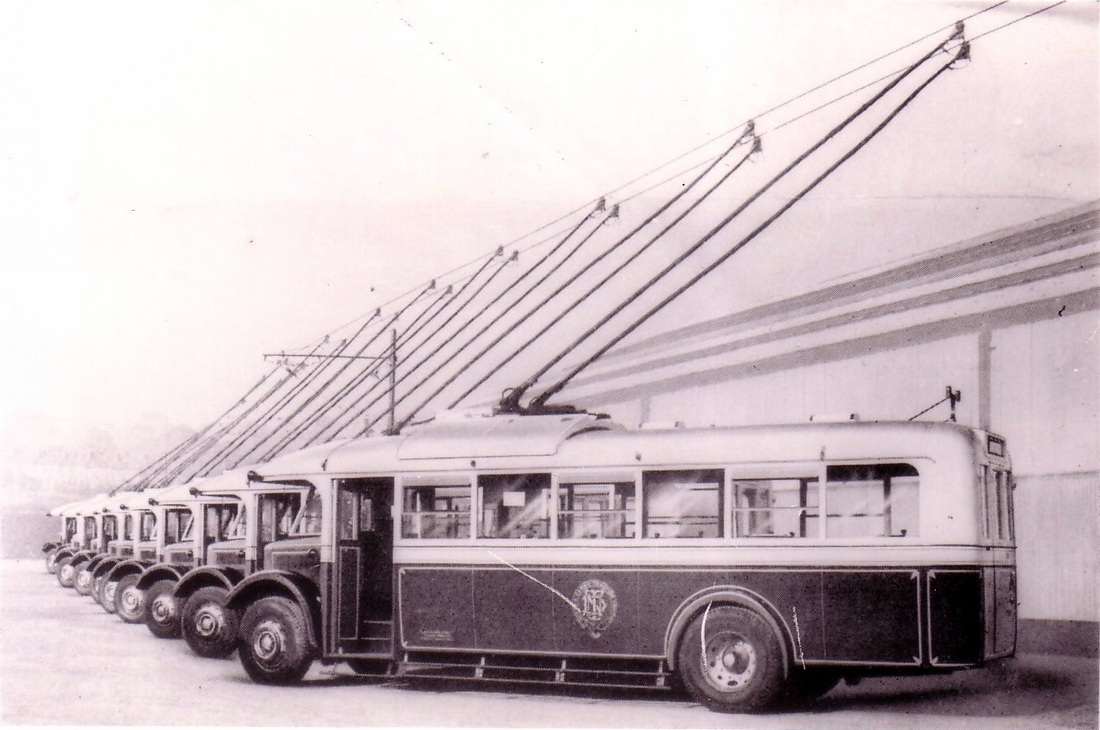 1932, The new fleet of ten Notts & Derby Traction Company AEC 662T-English Electric B32F trolleybuses are posed for a publicity photograph outside Langley Mill Depot. Registration Numbers were RB 6613 to RB 6622 and Fleet Numbers ran from 306 to 315 respectively.
These vehicles were withdrawn between 1941 and 1948. 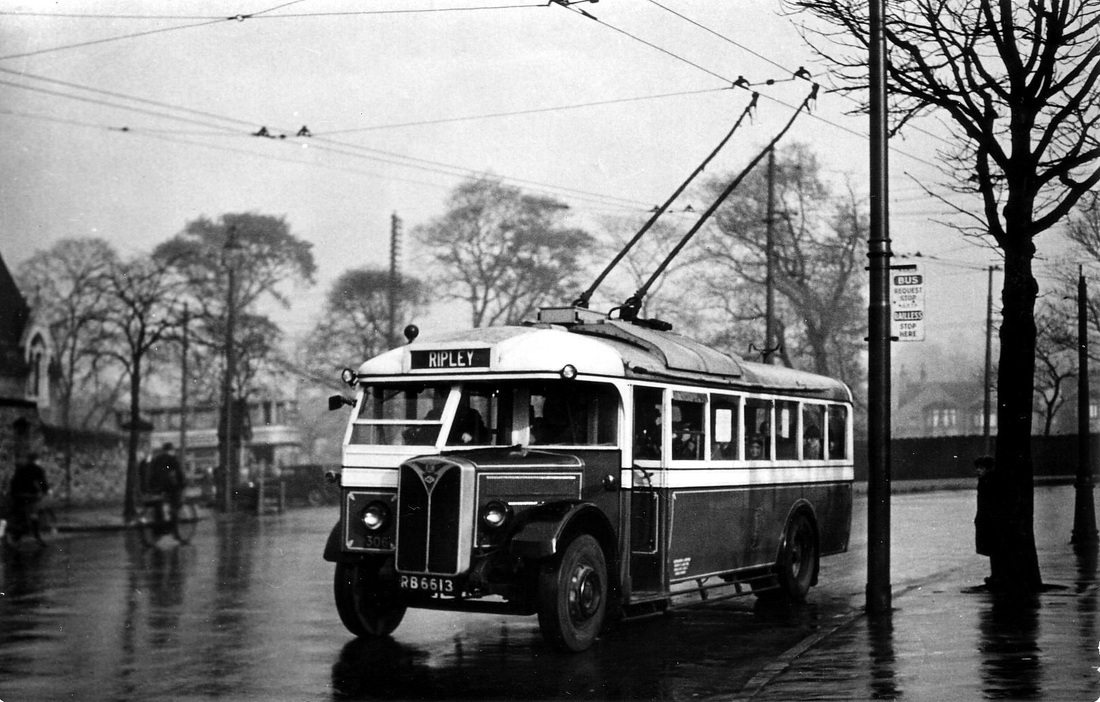 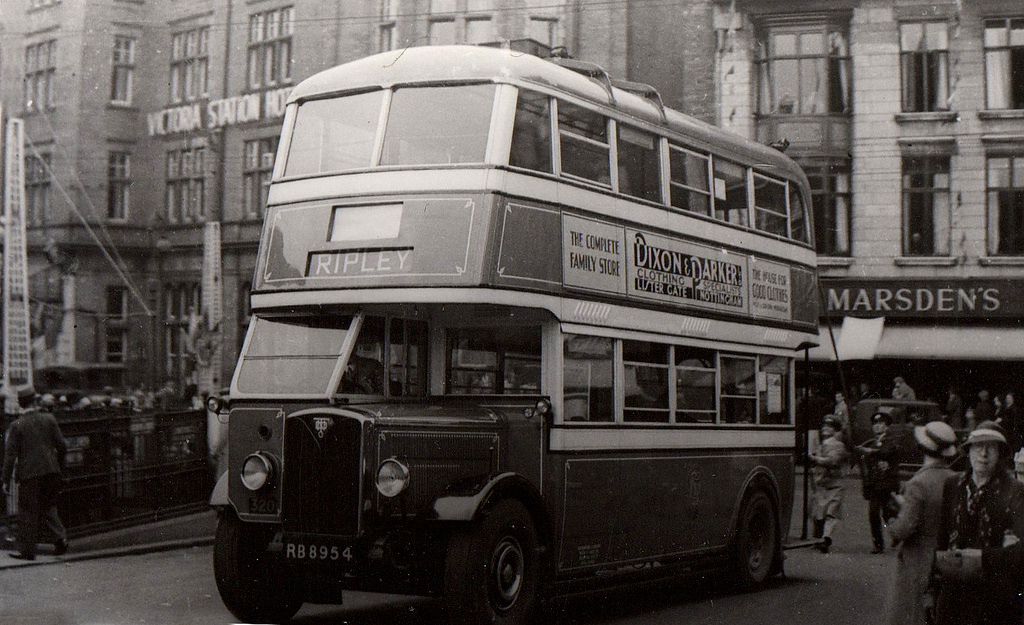 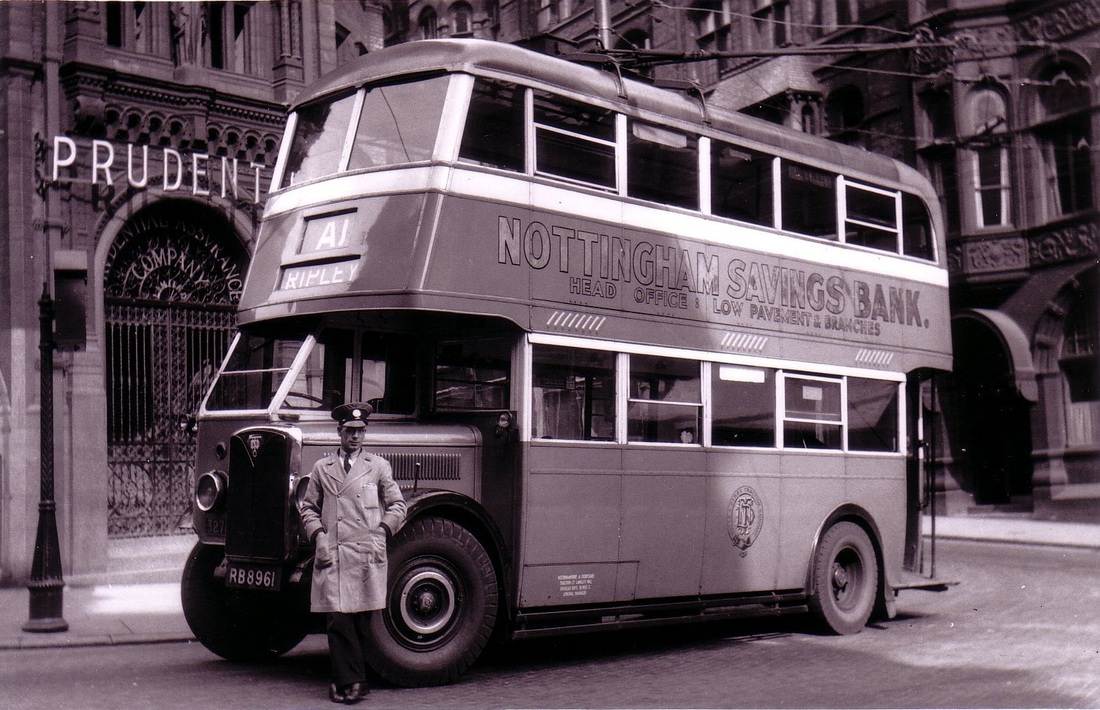 A spotless condition Notts & Derby RB 8961 AEC 661T-EEC / MCCW H31/24R trolleybus, fleet number 327, in early unlined livery (with no white bands immediately above and below the lower windows). Pictured at the trolleybus terminus at the junction of King Street and Queen Street, Nottingham. Destination: A1 Ripley. 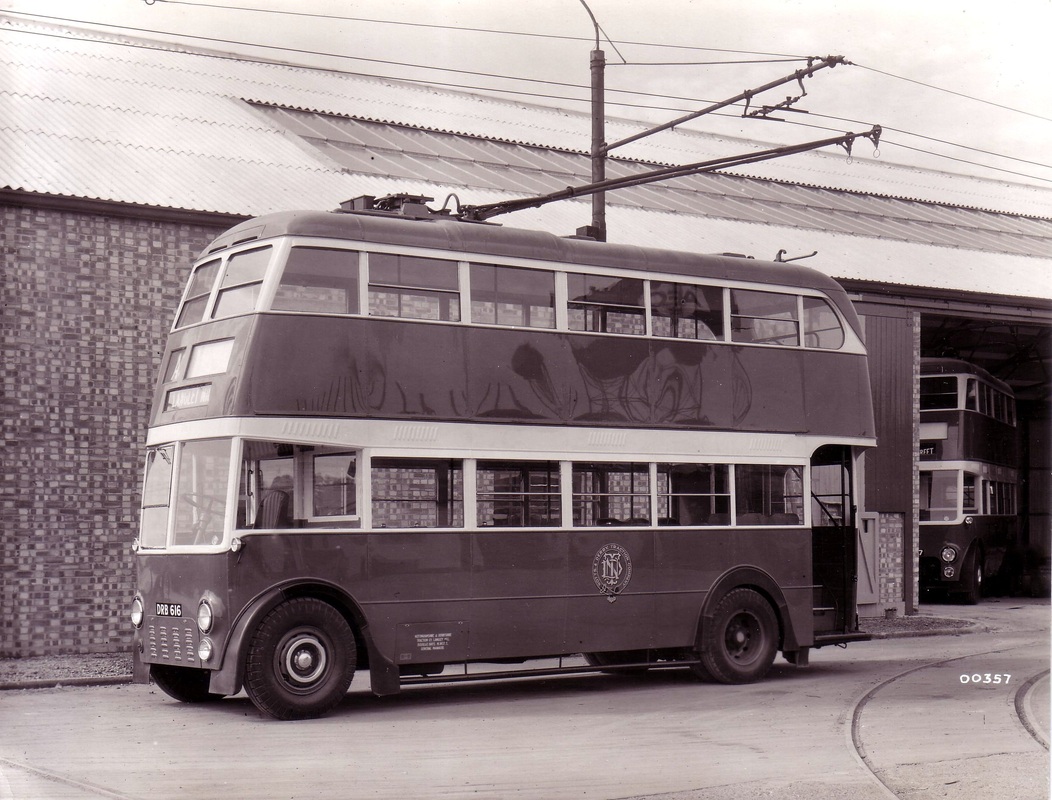 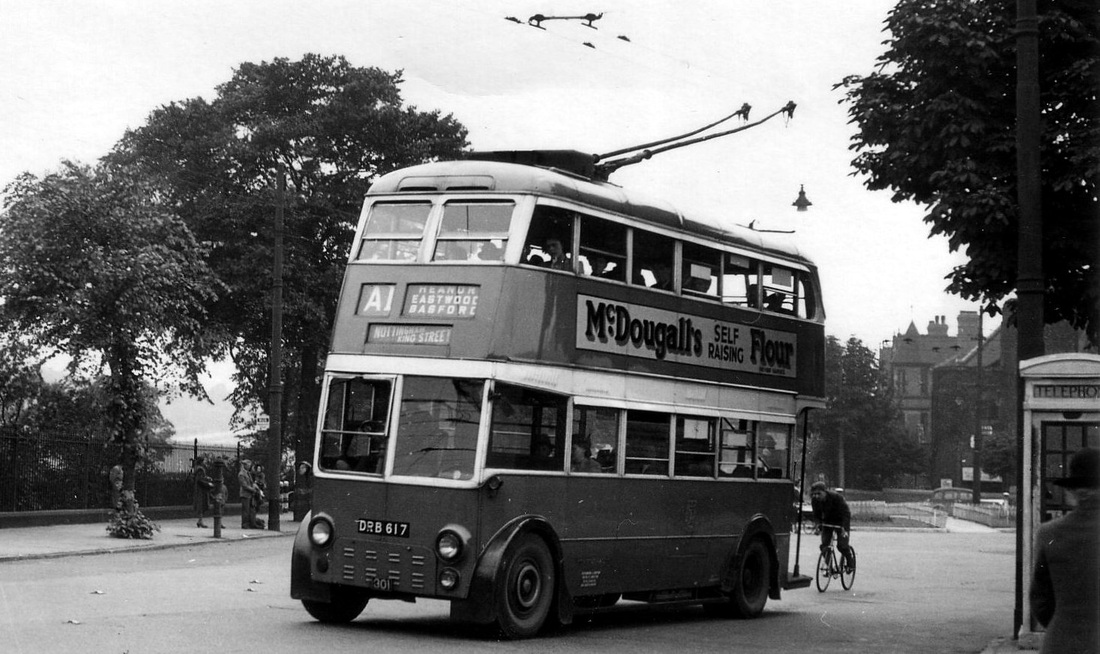 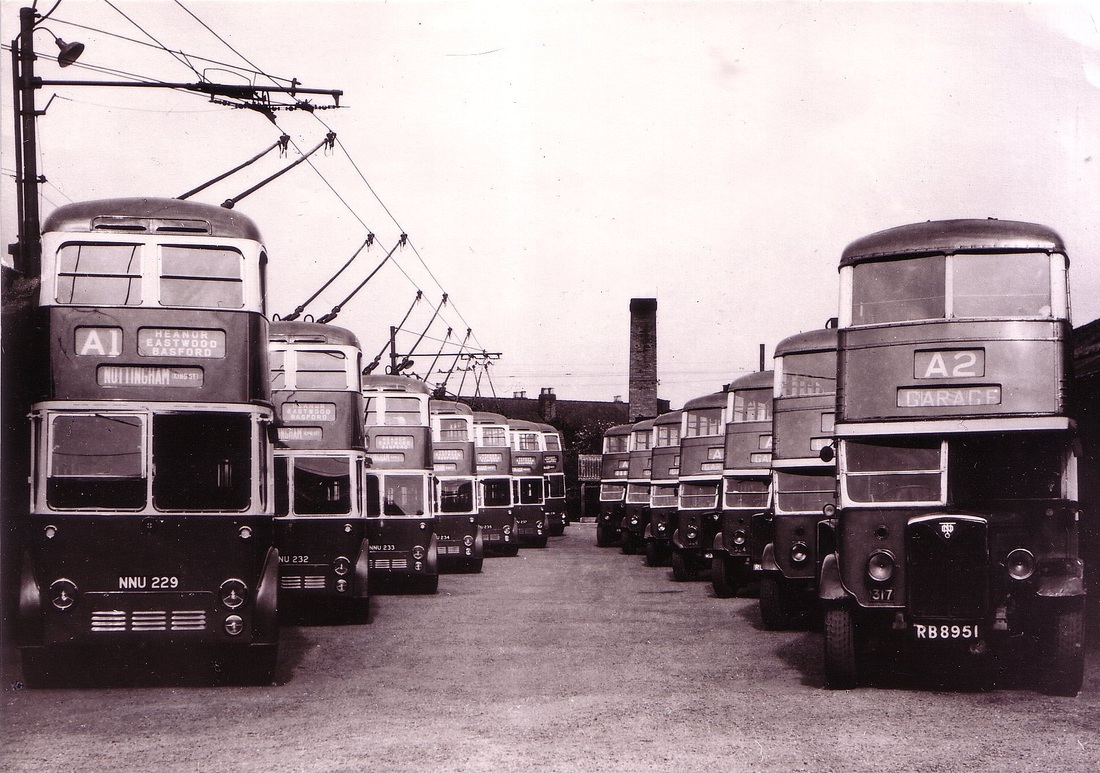 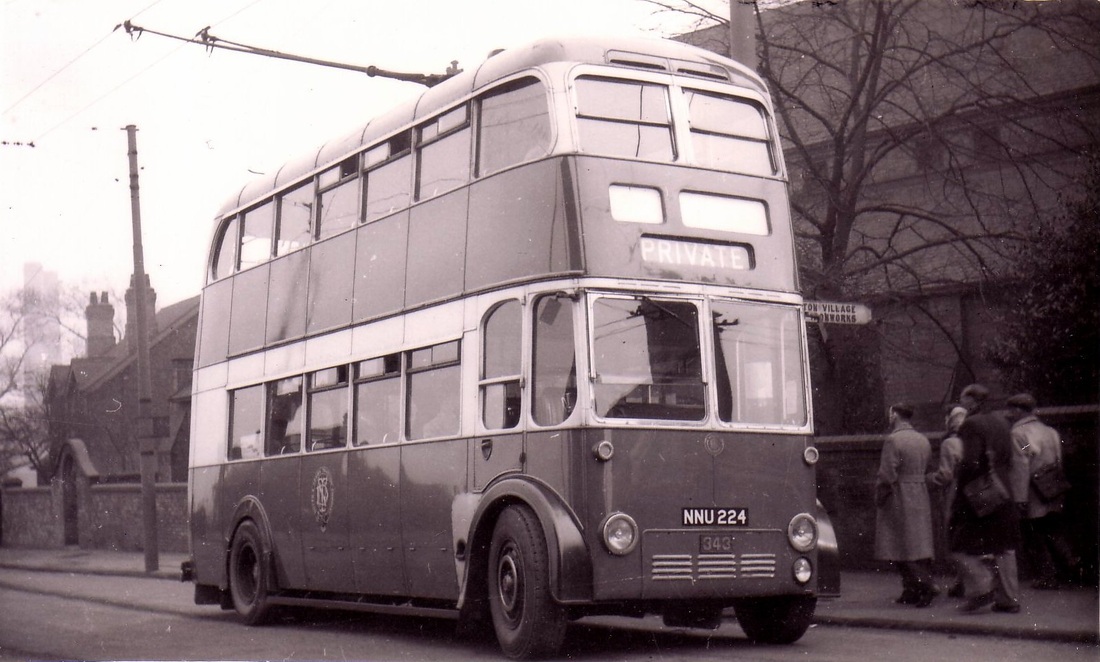 Notts & Derby BUT 9611T-EEC / Weymann H30/26R trolleybus NNU 224, fleet number 343, at Hallam Fields Terminus. The signpost post fixed to the traction pole reads 'STANTON VILLAGE AND IRONWORKS', which is off to the left along Crompton Road just in front of where the tram is waiting.
The destination reads: Private - indicating that the trolleybus is currently out of service. The crew are probably taking a break at the shop on the other side of the road ! 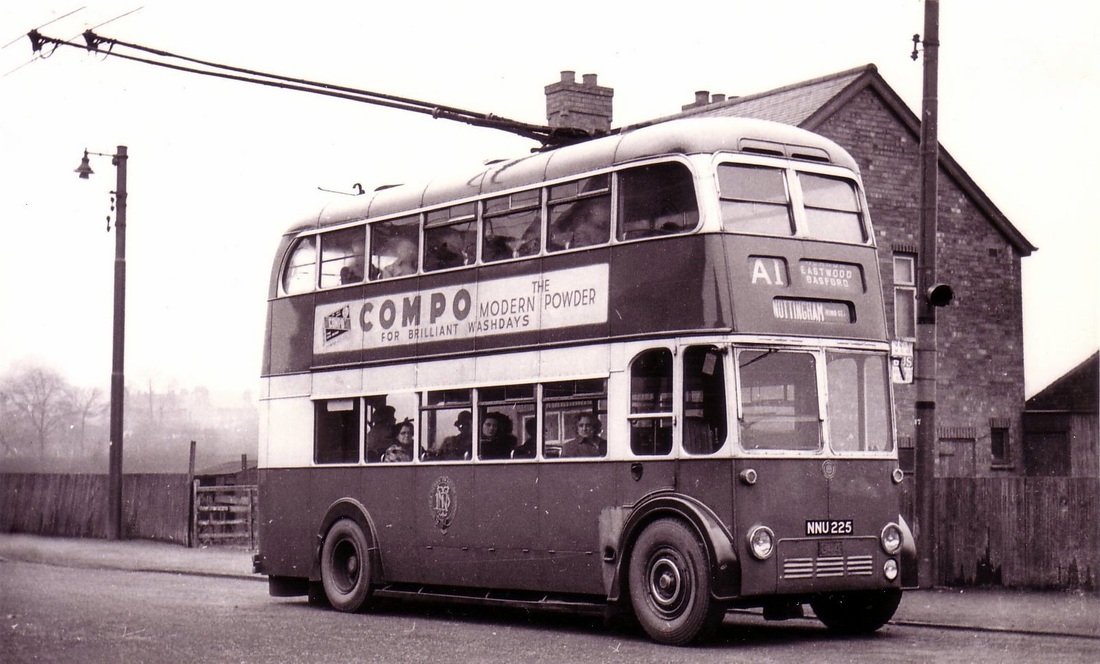 Notts & Derby BUT 9611T-EEC / Weymann H30/26R trolleybus NNU 225, fleet number 344, is temporarily parked on Mansfield Road opposite the Langley Mill Depot awaiting service on the Langley Mill ('Garage' as it says in the timetable) to Nottingham route. Destination reads A1 Nottingham (King St.) via Eastwood and Basford. 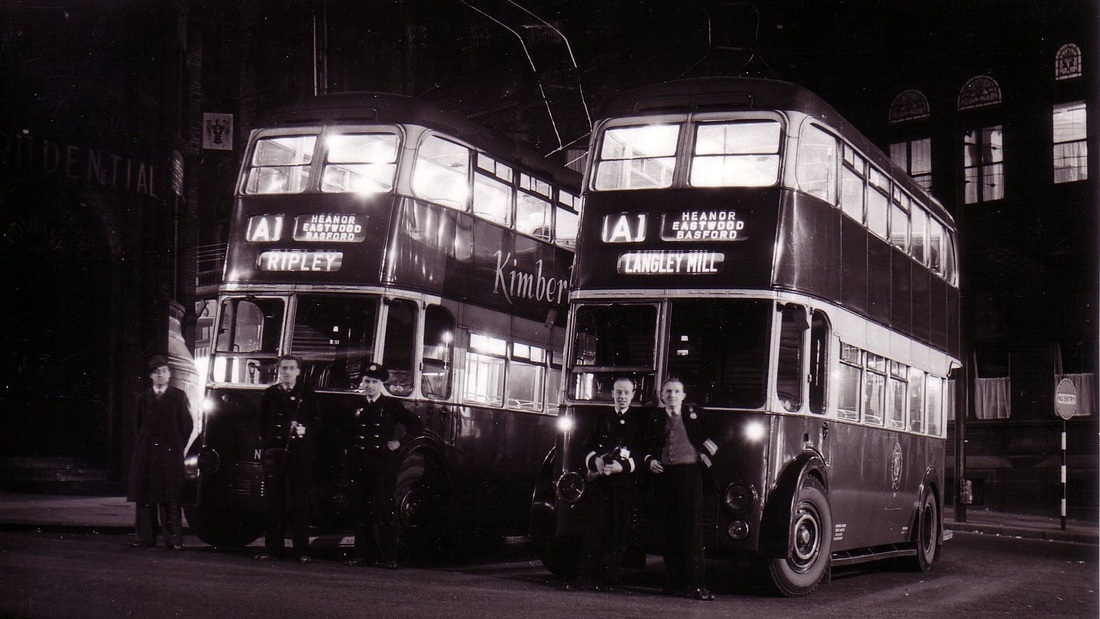 9.50 pm: two Notts & Derby BUT 9611T-EEC / Weymann H30/26R trolleybuses wait at the trolleybus terminus at the junction of King Street and Queen Street, Nottingham on the last day of service. The A1 Langley Mill service via Heanor, Eastwood, Basford departed first leaving the A1 Ripley trolleybus the honour of being the last Notts & Derby trolleybus service from Nottingham. 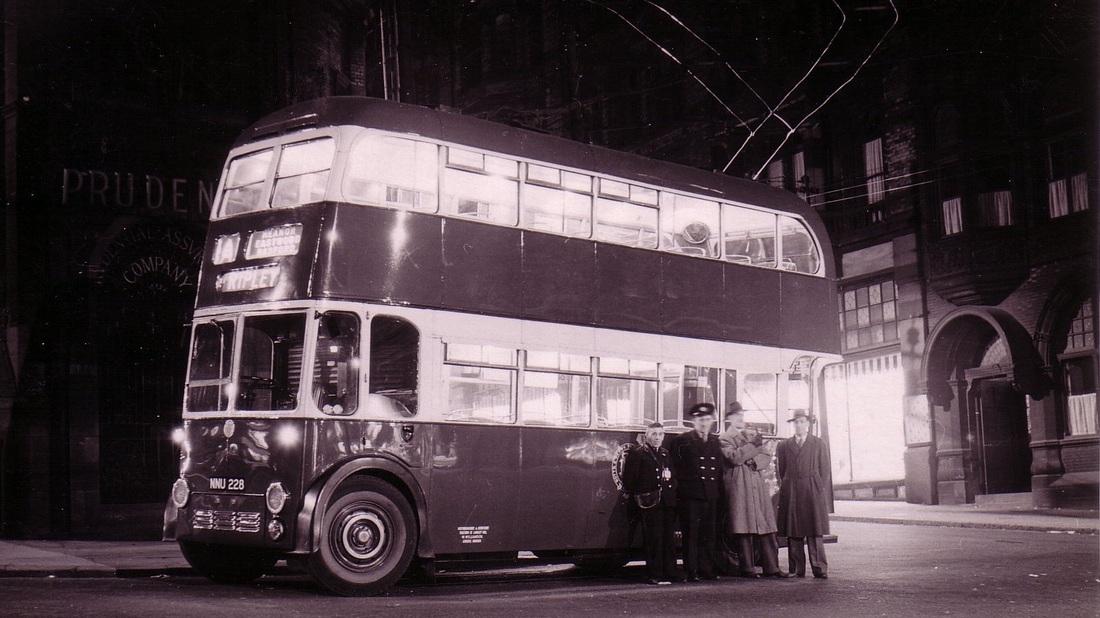 9.55 pm: the last Notts & Derby trolleybus service from Nottingham waits to leave for Ripley. The location is the trolleybus terminus at the junction of King Street and Queen Street; less than 100 yards from the Council House and Old Market Square.
Pictured is NNU 228 BUT 9611T-EEC / Weymann H30/26R trolleybus, fleet number 347, with (left to right) the conductor and driver are K. Laing (Traffic Manager of the Group) and K. Wellman.